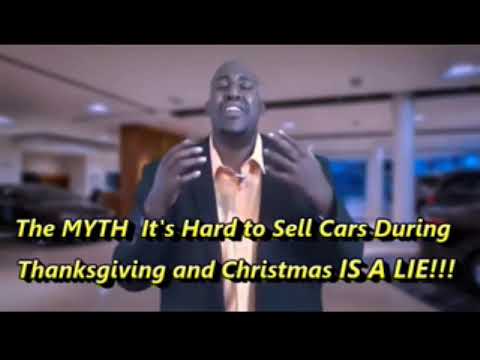 How to Close a Customer in Car Sales During Holidays

The myth that is hard to sell cars and make a lot of money during the holiday seasons like thanksgiving and christmas is absolute.

This time of year, is actually the best time of the year for people to come into your dealerships and be able to ride out.

In a nice new or pre-owned vehicle, but it requires, during this time of the year for us to increase our concentration on building value, on making sure that we become solution.
Providers asking the right question and give people a good reason and making it easy for them.

It just requires that you really slow down, and you really ask the right questions and listen with the intent to understand.
What’s going on, okay, because at different times of the year, when people come in to buy, there may be less things going on, but just because thanksgiving and christmas is here does not mean that all people just stop buying.
I hear sales people all the time say you know.

I know i would i know i’m going out of town i’m buying christmas shopping.
Well, thank god that we are not selling to you just because you wouldn’t make any buying decisions during thanksgiving or just because you, during the christmas season, don’t feel like it’s the right time, for you doesn’t make that the status quo for everybody.

As a matter of fact, there are plenty of people that buy vehicles as gifts.

There are plenty people who invest in a vehicle as a gift to themselves.

There are plenty of people who come into dealerships at this time of the year to buy for the tax breaks, so they can take advantage of the discounts.

There are a number of reasons, but the last thing that we should do as sales professionals is to give ourselves an excuse as to why people aren’t buying from.
I call that you know cell suicide because think about it.
We make our living of being able to help people make a smart, safe, buying decision at our dealership.

So to put it out there the reasons why people don’t want to come in and won’t come in.

That’s crazy because the same people that are making up those excuses typically are the main ones who are complaining about.
They don’t have enough money to go christmas shopping or they wanted to go and visit their family, but they just didn’t.

Have the money to go? Do so let me tell you straight up: i had some of the best sales month in november december i trained producers nationwide who are selling 20 and 25 units in november and in december, but how they doing it by making sure that they think, even more so Out the box that they’re slowing down their processes that they’re being extremely thorough, that they’re making sure that, with the question that they had when they find out where the pain is where the problem is, they focus solely on identifying a solution and make sure that they Go through it with that person to help them see how making the decision to do this, as they jump start going into their new year, will provide tremendous value solve whatever problem that they’re having and help them keep it going without missing the beat.

So this time of the year people do buy, but if you believe that people don’t buy this time of year, guess what they don’t buy from you, but there’s someone else who believes that it’s possible, i mean think about it.
Your store think about the top producers.

You have at your dealerships very rarely will you hear them make up excuses as to why people don’t buy again most of the people that make up those excuses or people who already have production problems throughout the year and so they’re looking for an easy way to Justify to themselves or to their family, but yet a manager man, they know what’s really going on, but yet we expect people to buy into that bull and and it it’s unnecessary, i mean how did this even start? I really believe it just started from people standing around looking for excuses to make as to why their sales were sucking, and they said i know what i’ll do i’ll blame the holidays and folks there’s holidays coming all throughout the year.
I’ve heard people say folks, don’t buy on president’s day; they don’t buy them for july, a number of bull crap, but at the end of the day people do buy.
But if you’re not taking the time to focus on being, you know training if you’re, not honing.

Your skills, if you’re, not role playing if you’re, not doing everything you can to be in front of as many people leveraging your social media, utilizing the phone call making sure that, when you’re out and about you are walking talking, billboard and guess what november and december May be a very difficult month for you, but it doesn’t have to be so seeing, as you have to think you might as well think positive everybody that comes into your dealership is an opportunity until it’s not so what that means is when they come in man.
I believe that everyone that walks in the store has a transportation problem that needs to be solved and they’re.
Looking for that solution, provider – and you know what they should be thankful, because i’m certainly grateful that them and i get to work together to help them solve that problem.

That’s what we do, but during this time of the year you have to focus on building value.

You have to work on building relationships.
You have to focus on being a solution provider not being the cheapest.

But if you don’t make this person feel appreciated.
They’ll never do business with you.

They’ll go off the street and buy from somebody.
That’s offering here for two three four thousand dollars morning: yours, yes, money and price is always always gon na be on the table.
But when value supersedes price price drops a little bit.

There are people doing a number of things.
Business doesn’t stop just because it’s the holiday season as a matter of fact, being this the holiday season, people are in the giving spirit, so you just have to focus on doing the best you can to give them a positive experience, making sure that you hone your Skills and you do everything you do to make it easy for them to do business with you at your store.
One thing i encourage you is this: make sure that you, like the video, give us a thumbs up if you and i aren’t connected, let’s connect if you want to subscribe subscribe that way, you can get up-to-date notifications on the new uh different new training, videos that Come out, if you are somebody in sales and you’re, looking to take yourself to the next level, make sure that you constantly check in .

Road to The Sale – Step #2 – Qualifying a Customer

Road to The Sale – Step #1 – Greeting a Customer

3 Best Ways to Qualify a Customer