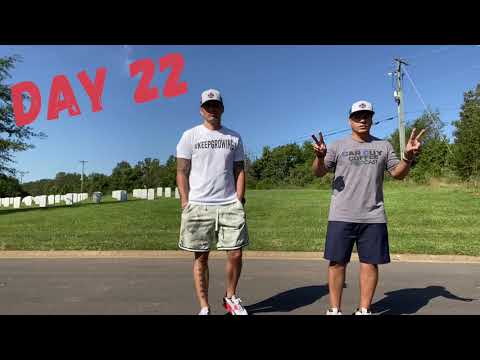 Yes, we are at a memorial cemetery, there’s a lot of people that have fallen for the sake of our freedom and we completely honor that this entire outreach has been to raise awareness for people to know about the 22 people a day that are taking their own Life uh that are veterans as well.

That is it’s a it’s a crisis and i think the biggest thing is that we need to just spread the word about it.

I think the more people to know the better it becomes because for me i didn’t really know about it until recently.

So now that i know about it, i’m trying to spread the word about it and i’ve had a lot of good people come on, accept the challenge, i’m glad to see they’re pressing it out there and they’re doing some stuff to spread the word.
I’m very happy to hear about that um, but lou and i were honored to do it.
Um i was nominated by blake norbert.

He was nominated by my brother, joseph bell, yeah and man.
What an honor we’re gon na drop down and do these 22, but we’re gon na do a military count.
It’s basically a four count, basically, two two push-ups per capita um again.

The importance of this also is to build a bond of battle, buddies to be friends that become brothers and uh sisters and connected like family.
We are challenging a uh, a group of sisters that bring so much joy to this world and we’re so excited uh to have them jump in on this challenge with us as well, and i know the systems of savings, this is a savings.
I got melissa hannah.

You better come with it: 22 push-ups 22 days, michelle streets 22.
Here we go, get them ready all right.
The four count push up the four count: push-up.

Twenty two and one to go on one.
Two: three get you some whoo, let’s brew, oh god, i’m not gon na lie burned out.