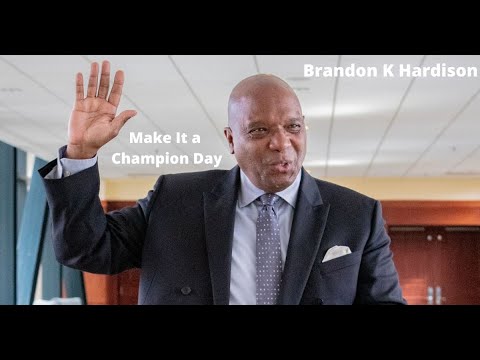 Hi brandon hardison president of champion strategies with our ongoing series on public speaking, giving you that first year, teacher in front of the babies an opportunity to pick up some skills that you’re going to need now to the end of the semester.

Because you are undoubtedly with the hardest job for me, looking at it and that’s getting our babies prepared for the future.
The right way.
Also, first-time supervisors managers out there you’re going to be talking to your team members about many things, but when it comes to improving on anything they’re relying on you and public speaking can help, you uh get your team members to do what you need them to do Before a deadline is hit other than that, someone probably told you you’re a great public speaker, why don’t you try it and then the covet hit? And you see that everybody’s gaining time for space inside this box? That may be very difficult, but because of your interests, you now can see that there’s some great institutions two for a year that will give you a good, solid career change in communications.

Or there are some organizations that just specialize in public speaking and take advantage of that, but they do cost or you’re.
Maybe one of those people who can just go through and just check out content, look at videos and you’re disciplined enough to be a better public.
Speaker, no matter what the situation we’re here to help you so we’re going to pick up, because it is the labor day weekend from where we left off and we’re talking about labor day speeches.

Many times you’re caught and you’re asked to do something in front of a middle to large group, and you are terrified because you never thought you would be called, but you you are so on the last one.
We were talking about some of the situations that may come up, so we’ll continue with that.
There’s going to be some people that are looking at labor day as a controversial issue dealing with the military and the founders you may be caught in a situation where you have to do it on remembrance or honor of someone in your family or friends who were In the service and there’s no family drama like that, as you know, with thanksgiving or no religious issue like that of christmas, however, a hundred years ago there was controversy.

The first controversy that people fought over was how militant workers should act on a day designed to honor their work being labor day.
Communist marxist and socialist members of the trade union movement supported may first as an international day of demonstration street protest and even violence, which continues even today.
More moderate trade union members, however, advocated for a september labor day of parade and picnics in the u.

s picnics.
Instead of street protests won the day, there are also disputes silver, who suggested the idea labor day, the earliest history, from the mid-1930s credits, peter j mcguire, who founded the new york city, brotherhood of carpenters and joiners in 1881, when a date at that time, was trying To be found midway between the 4th of july and thanksgiving, that would publicly show the strength and the power of that trade organization later scholarship from the early 1970s made an excellent case that matthew mcguire, a representative of the machinist union, actually was the founder of labor Day, however, because matthew mcguire was seen as too radical, the more moderate peter mcguire was given the credit now who actually came up with the idea will likely never be known, but you can vote online and express your views just find a search engine and you will Find different sites that you go to that are asking your opinion about certain things on this particular holiday season.
So have we in general lost the spirit of labor day well labor day today is no longer about trade unions, marching down the street with banners in their tools or trade.

Instead, it’s a confused holiday with no associated rituals.

The original holiday was meant to handle a problem of long working hours and no time off.

Although the battle over these issues would seem to have been one long ago.

This issue is starting to come back with a vengeance, not just for manufacturing workers but for highly skilled white collar workers, many of whom are consistently asked to work.
If you work all the time and never really take a vacation start, a new ritual that honors the original spirit of labor day, give yourself a day off, don’t go to work, shut off your phone computer.
Other electronic devices connected with you and your daily grind then go to a barbecue, like the original participants did well over a century ago and celebrate having at least one day off from work during a year once again, brandon hardison president of champion strategies giving us our Good public speaking tips for today, so hopefully you learned a little bit about this weekend when we celebrate labor’s day now, you can talk a little bit more about it.

As always, parting brandon, artisan president of champion strategy, says to you go up and make it a champion day.