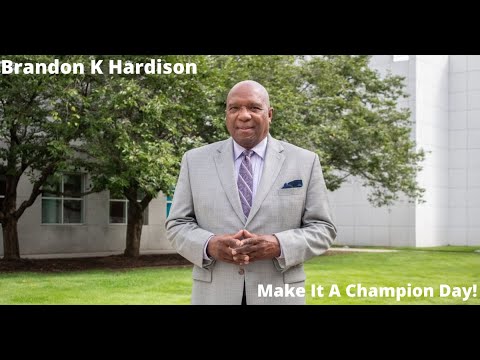 Hi brandon hardison president of champion strategies and giving you more of our public speaking workshop, we’re on part three of a series because we’re trying to help folks out think of a different way.

You can do it if you really want to.
You just need to find the right vibe if you will, that fits into what you’re doing so, hopefully, what we’re giving you is helping someone out there.
So, let’s just get right to it.

Over the past two sessions, we were talking about improving your public speaking skills.

So here’s another tip how about telling stories and making the stories personal so think about your audience.
They don’t care about personal stories.

Let me put it this way.
They would probably care more about the story.
You just told them than the pie chart on the screen behind you.

You see your audience is more likely to remember and share the stories you tell them with stats figures.
Your packs inside your slides, in other words, making your presentation personal and it will always remind them that you’re human check out a few top ted talks, and you will see basically the ones that were always given high marks had some type of personal story attached to It when they were delivering it so always keep that in mind.
We know you’re going to be nervous.

We know that there’s positive energy in there, but for the first time right now, your mind is telling you that you don’t know.
If you can do this presentation now, we find ways of channeling these things.
When nerves come, everybody gets nervous, professional athletes, amateur athletes in relationships acquire going out to sing for the first there’s, nothing wrong with being nervous, but how we channel this example.

After watching some reporters interview, some olympic athletes, you notice many things start to happen as the same questions starts.

Coming from the reporter, the different athletes are always on theme in their own way by either saying things like.

Yes, i was excited but boy.

I couldn’t wait to get started.
Yes, my hands were sweaty, my neck was tense.
My heartbeat was fast, but i was so excited to get the race started.

So the key thing we know that you’re going to be nervous, but take that energy and fuel it and say yeah.
Let’s get it on.
I’m ready to do this.

How about speaking, slowly and pause? Often speaking, slowly is hard to do, especially when you’re.
Given a presentation, but not only does a slower speed, make it easier for your audience to understand.
It also makes you seem more composed and thoughtful you’re, placing yourself in front of the group of people.

So how can i pace myself with this group? So it’s feeling natural to them, and it’s a little unnatural to me, because i’d rather speak at a quicker pace tone keep it where it’s at.
Only then you’ll realize the importance of how that process works with an audience another way to control.

The pace of your presentation is to routinely pause between three to five seconds.

The length of the pause remains controversial by many, but it allows you to take a breath and refocus on whatever you wanted to do next, making sure that i’ma go down that avenue.
Now that i get this response, let me interject this in as a bonus.
Pausing is one of the best things you can do, because the audience will eventually understand that last statement that you made, especially if you tied it to a personal story, always when it’s time for the q and a question and answer series, always repeat the audience question Now here’s where i’m going, you know that they said it, but the other people in the room may not have heard the entire question.

So when you receive a question, thank the people for the question.
I thank you for that.
So what you’re saying is, and just repeat it out – it ensures that everybody understood what the question was and now they’re actively listening to what your response is when it’s applicable reinforce the key points of your content that take away peace, that explosion, that you want to Leave with them, and always if you’re using some type of video, always make sure that you keep a copy.

So you can always go back and watch yourself.

I don’t care what profession that you’re in sports public entertainment as far as a comedian dancer musician.
They tape everything, so they can go and play it back to actually see where the mistakes, if any, were at always end early, and please always say thank you whether your audience gave you five minutes of attention or an hour end early and say thank you.

People believe me will rather have you shorten your speech, because i guarantee you on the program.

It’s already gone disarray, because too many people like to talk.
They start talking emotionally from their heart, getting away from the script and the person in charge of the program.

The clock is moving and they don’t know if they can get everything in and here’s what you’re going to hear.

Sometimes as a public speaker, i know we’re allowing you 30 minutes, but can you cut it back to 20? Now you smile do what you think give them the 20, but remember it’s going to happen, so you need to be prepared.
Public speaking, ladies and gentlemen, is an art it takes years to perfect, but by following some of these steps it will ensure you that you have the stuff to be in front of the students.

You have the stuff to be that supervisor manager.
You have the stuff to be in front of an audience that an organization paid you to come talk to their team members on a specific subject, and hopefully they’ll call you back for some additional training once again, bradford hardison president of champion strategies for our public speaking Workshop, if you got something out of it, i’m happy we’ll be back for another installment and as always in parting, you go out making a champion.