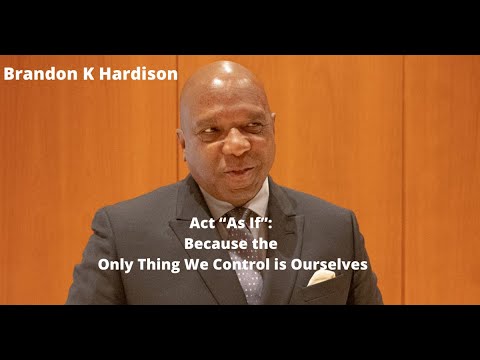 CHAMPION STRATEGIES – PUBLIC SPEAKER WORKSHOP – SEPTEMBER 15, 2020 Act “As If” Because the Only Th

Hi brandon hardison president of champion strategies with our ongoing series of public speaking and what you need to do.

Why do we do this? Because we have first-time teachers that are going to be in front of the room of students, and that is the biggest job that is, they are preparing the babies for the future, making them good citizens and taxpayers.
So you have a tough job.
You may be a new supervisor or a new manager.

Congratulations now you have people depending upon you, your team members for their success.
So remember: there’s a difference between a training meeting and a beat-up session.

If someone or organization is not meeting by department, their goals, we don’t scream, we don’t holler, we don’t belittle, we don’t rate we train.

So if there is a training meeting and you’re calling them together or in this box as far as a zoom, your first words are we’re going to stick with training.

I don’t care if your boss, just called you and say remind them that they need to hit this particular it’s a training meeting, keep it separately once you cross.
That line.

You’ve lost your team members because now they’re, fearful anytime, there’s a meeting you’re ready to pounce on somebody or you may be one of those people who said, i was always been told, i’m a great speaker and then covet hit and now everybody’s operating out of these Little boxes and space is crowded, but what you found out is that communications, which public speaking, is a part of well.
It might be a great career change.
Now, there’s two-year four-year institutions that will give you a litany of different communication applications for a career change and there’s also organizations that just concentrate on public speaking themselves.

Why? You may be one of those people who just go through the internet, find content or look at a video and said yes, i like that.
I can incorporate that into what i do, because you’ve mastered the art of being disciplined and you know how to practice.

So we at champion strategies, we believe in just giving you some free information and you can use with it what you think so today, what we want to talk about is act as if, because the only thing we can control is ourselves think about it.

We want you to think about what you can control, don’t worry about the guests, and i say this because lately, a feeling of control by some people who’ve been responding in is hard to come by, especially in this covet 19 situation.
Like many people, i think that i’m in control of myself and of my prospects, my own life, but with this unchecked pandemic, the coming of the climates and the chaos and the near collapse of the economy and back up again in wall street is down.
And now we got ta deal with, can we do school face to face or remotely? And now i got ta spend time with my babies at home and i need to be at work.

So, yes, there’s a lot of things that are pressuring us right now, yet the research is clear humans, you and i do best when we have some control.
That’s why we work harder and better on things we choose and why being micromanaged is so destructive for people’s mental and physical health, and there are managers who do micromanage.
And what do i mean by that they’re on you from the minute you punch in to the minute you go out, you can’t do anything right.

I’ve been in that position, some of you out.
There may be thinking the same thing so wanting some control is not unnatural, it’s a human thing, so we need to act as if we’re already there, acting as if it’s a form of make-believe when we first convince ourselves and then convince others in spite of unveiling Reality around us.
We still have at least some way to show that i’m control of my life now some people call this self-preservation and you may have heard of that before and say.

Ah, that’s a little shady, but the ability to act as if you want to stay motivated yourself.

You want to keep on going because you have a new reality or goal that you would like to hit.

Someone looked at you and told you at one point that you can do anything that you want.
You may have questioned yourself.

You may have bought an end to it and then proceeded to find out more information to get better.

Now, if you’re, not one of those people, i guarantee it was told to you once you probably just missed it.
So when we talk about public speaking and we want to act like we know as if i control this public speaking, that’s because public speaking, especially the kind that we’re talking about and doing, will put you in a position to extend to others out there.
Your confidence, even the most experienced public speakers always challenge and wonder because uh they may say, they’re not nervous, but nervous is natural.

I did not say fear we’re just nervous of what we’re going to do.
They’re, not feeling self-conscious people who have control of themselves.

We have to practice practice practice and if you watched any one of my videos with public speaking practice separates you from the average people, not that they’re bad, they didn’t put in that extra time.
So yes, i would always recommend somebody to take some public speaking course.
If it’s not for the love of doing it, it still can help you out being at peace with yourself, whether you’re in conversation with your friends, your family members or people in your social order.

So with that said, it’s especially hard to feel in control and to connect with people to make an impact if you feel less than in control.

Now that makes sense think about this teachers always told us to act as if we know act as if you’ve been there before.
If you have that coach same thing with public speaking, i haven’t done it before, but let me walk through this door and i know i can do it now.

The audience is watching you, the more.
You show your confidence, the more that you show that i’m in control of this situation, the more they’re going to be clinging on your every word once again, brandon hardison president of champion strategies with our ongoing series on public speaking as always in parting.
You go out and make it a champion day.